Manjusha art is the folk art of “Angpradesh”, Ang region which is currently known as Bhagalpur in Bihar State.

This art was earlier done by only two familes the Kumbhakar caste and the Malakar caste. The Kumbhakar caste used to make the pots on which the manjusa art is painted and wor- shipped during the festival. The Malakar caste makes the actual “manjushas” and paint the manjusa art on this strucutres.There is another caste called the Kashira caste, they used to make the pots out of “peetal”/brass. There are only two families left who still practice this art. 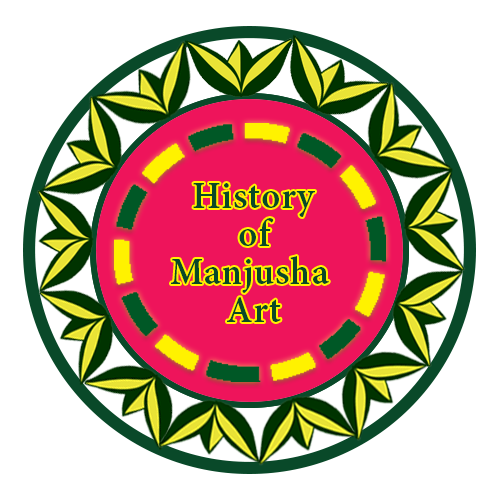 Earlier the Pandit family Cheddhi and Basant Pandit used to make the manjusa art for the temple, for this service all their expenses were taken care of by the village.

This art has been prevalent in Bhagalpur for a long time but between1931 -48 , it was brought to the forefront. In this period during the British rule, an ICS officer by name W.G.Archer and his wife started finding out more about Madhubani painting and Manjusha art.He fell in love with the art form . W.G.Archer put a collection together of manjusa art and had an exhibition in The India Office Library in London which became part of the Archer Col- lection.It was at this time that Manjusa art gained international recognition.But at that time due to the British rule the artisans could not flourish. After this golden period, Manjusa art seemed to be fading away in the background and was being practiced only by some people. In 1984 the Bihar government made an intitative called “Jansampoorna Vibagh” in which they went to the villages of Bhagalpur and showed them slideshows of Manjusa art and edu- cated people about this traditional art form in the hope of reviving it.

After which Smt.Chakravathy Devi and Jyothi Chand Sharma came into the picture and helped revive this craft.Smt.Chakravathy Devi was one of the most traditional artisans and belonged to one of the two families who have started this art.She has worked tirelessly in reviving this craft. During the same time Smt.Nirmala Devi also started working in this field and has come to be known and honoured for her efforts to revive this craft.

In 1992, an artisan by name Mr.Manoj Pandit started experimenting with different materi- als and started painting on silk and other fabrics which helped take this art to the next level. From being just an art done for religious purposes, the artisans were able to use it in prod- ucts more suited to the market.

The Bihar government has been making a lot of efforts to revive this craft and many skill upgradation trainings have taken place both in Bhagalpur as well as in the nearby villages. They have made a good effort in trying to make people aware of this craft. They have taken certain moves like it is madatory that all the Zilla Parishad banks have to have a manjusa art painting hanging in their banks, which automatically provides the artisans with some kind of market.Recently the Bihar government has put together a committee which comprises of 11 people out of which 4 artisans will be present to apply for a patent for the manjusa art form. They are planning to patent it as a Bhagalpur folk art. 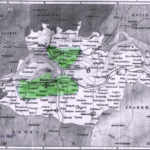 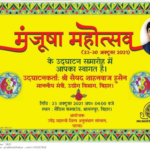 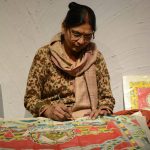